If you search long enough, you’ll find 1,001 different methods to cook ribs, so it can be incredibly overwhelming to try to figure out the one method that will deliver the lip-smacking, finger-sucking, amazing spare ribs that you’re after.

Before we dive into my spare rib recipe, let’s get something straight right off the bat: amazing spare ribs don’t need to be complicated! If you stick around long enough, you’ll discover that I’m a huge fan of keeping things simple…and inexpensive.

People will give you all kinds of formulas (such as the 3-2-1 method) and tips for using ungodly amounts of aluminum foil for  controlling the amount of smoke that the ribs take on and all kinds of other nonsense, but take all of that advice with a grain of salt because it simply isn’t necessary. Phenomenal spare ribs don’t have to be a pain in the butt!

The very first thing you’ll want to do when you lay your spare ribs out on the cutting board is to clean them up. Remove the silver skin from the back, slice the skirt meat off (feel free to save it and cook separately!), and trim off any copious amounts of fat. The reason why you slice the skirt meat off the top is because it will cook much faster than the rest of the rack. The video below shows you exactly how to go about trimming and cleaning a rack of spare ribs:

When the extra meat and fat have been removed from the spare ribs, you’re left with what’s known as St. Louis style spare ribs – beautifully rectangular slabs that are nice and uniform, as seen below. At this point, you’re going to slather yellow mustard all over the ribs. Don’t worry about the mustard imparting flavor into the meat, because it won’t. It’s simply used as a “glue” to better hold the rub that you’ll be applying next.

As pictured below, don’t hold back on the rub. After the spare ribs are completely coated in yellow mustard, heavily apply your favorite BBQ rub (Meat Church rubs are my personal favorite) to each rack. The rub will work in conjunction with the mustard to develop an amazing, flavor-filled bark on the ribs as they smoke on the Kamado. After the spare ribs are liberally coated with with mustard and BBQ rub, wrap them in plastic wrap and let them sit in the refrigerator for 24 hours or so. This will give the rub plenty of time to penetrate the rib meat and will give you maximum flavor potential.

Set the temperature of your Kamado to somewhere between 225F and 275F and throw a few chunks of your favorite smoke wood on (I tend to use hickory because it’s readily available, cheap, and imparts great flavor).

Place the spare ribs in a rib rack (this is the one I use), close the dome, and keep an eye on things. You don’t want to go much above 275F or you’ll run the risk of overcooking them.

After a couple hours on the Kamado, I like to coat the spares ribs with sauce. I try to get a couple coats in before serving them to layer on the flavor.

Pro tip: Want to duplicate that glistening sheen you see on competition ribs? Use a mixture of half BBQ sauce and half honey to coat your ribs and you’ll need sunglasses to look at them! To determine when my ribs are done cooking, I prefer to use the bend test where I’ll simply grab a slab in the middle with a pair of tongs and gently shake it up and down. If cracks appear between the individual ribs that run the length of the bone, I know they’re good to go.

Tell me these bad boys below don’t looks absolutely incredible! So as I said, you can waste as much time and money as you want finagling with unnecessarily complex rib recipes, but the truth of the matter is that as long as you don’t overcook / over-smoke your ribs, they’re going to turn out amazingly well.

I highly suggest using a simple recipe, such as this one, next time you want to smoke spare ribs and see how they turn out. This will give you a good baseline for determining what tweaks are needed next time for making them uniquely yours.

There’s definitely no shortage of ways to prepare spare ribs, so I’d love to hear how Kamado Jim readers prefer to cook theirs. What works best for you? Do you swear by the Texas Crutch or is it completely unnecessary? Do you have any horror stories about completely ruining a grill full of slabs? Share your spare rib recipe secrets and stories in the comments below! 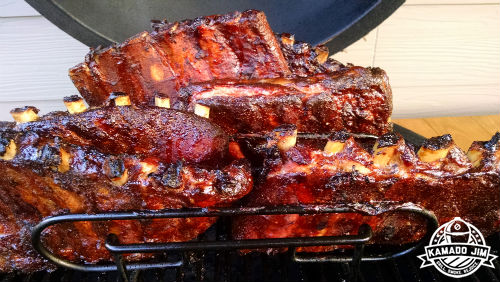